The Beginning to a (hopefully) Bright Future: Shanna’s Tale Pt. 1 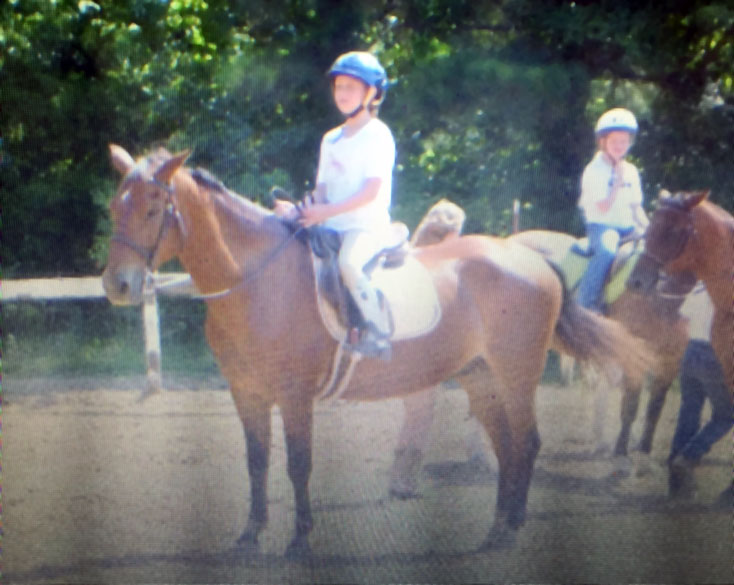 It all started the summer of 2001 in Maryland at the wee age of 3. My two older sisters were at horse camp, and I was with my mom feeding carrots to the horses in the barn. Apparently, according to my mother, I just walked right up to a horse, whose name was Raja and looked very much like the horse in the picture, and gave him a carrot much like I give treats now…the wrong way (whoops). After moving to Tennessee in December of 2001, I didn’t really do anything with my love for horses other than play with toys. I did other sports that all little girls did like gymnastics, basketball, soccer (of course) and others but never horse back riding. It wasn’t until kindergarten that a friend and I decided to try a horse camp for the summer. Needless to say I loved it and did it again and again and again until I finally was able to take lessons.

I started my once- a-week lessons at Horse Crazy Farm. I honestly can’t remember what year I started but I’d say it was around 2004-2005. My first lesson was on Rambo, who is still having a good time in retirement. After my first few months there and some summer camps later, my current trainer came to the barn to start teaching hunter/jumper lessons rather than the equitation lessons (which we all know I just love so much) I was taking from a different trainer. After a few lessons there, Horse Crazy eventually closed down.

I had the option to follow my first trainer or follow the horse to a different barn.

I came to Trinity Farm about 11 years ago when all there was was an arena, a tack shed, and a huge paddock for the few horses that were there. Lessons and months went on and eventually I got into the groove of soccer and riding every week. The farm was also slowly improving and adding things to it. I remember my first show I was going to do was an Alderwood show on Rambo in the 5th grade (which was roughly 8 years ago, I’m so old).

Alderwood was the old schooling shows that were held at the Germantown Charity Horse Show grounds, which are now replaced by the Megford Schooling Shows. Unfortunately, due to weather, I was unable to show and very very unhappy to hear it. From that point on, I moved to Grady who was one of my all-time favorite horses. Although his refusing habits were slightly annoying (only slightly), he taught me a lot, and I had a blast on him.

So this embarrassing picture was from an Alderwood Show in August of 2007. With my velvet clad helmet, huge polo shirt, and puffy ponytail, Grady and I ended up getting a 2nd in one of our walk/trot cross rail classes. I was on top of the world FYI, granted we didn’t place so well in the other classes, but hey, second is pretty good for a first go around. At later schooling shows in the 2ft division, we made it over a total of 3 jumps (I think). Then one more show like that and I moved on.

After that it was business as usual: school, riding, and soccer. I stuck to my once-a-week lessons and eventually was able to lease my first horse. His name is Danny and he was also the greatest horse I’ve ever ridden (very repetitive, I know). He, like Grady, refused more than I’d like to admit. We did well together in our first show in the 2’3″ division in June of 2010. Again, I thought I was on top if the world, but like before, it ended in the next show in November of 2010 when I couldn’t get the horse over a jump in the schooling ring (quite embarrassing). After that I went back to Grady to get my confidence back up, and I sure got it back. While I didn’t show him again I did see some improvement, little though. Lessons went by, and I got back on Danny. With what little improvement I had made I rode him better but still didn’t show him again.

Then the day came when I got to ride Shaq in August of 2011. Man, I thought I was the coolest person. You would not believe. I was 13 at the time, and Shaq was 7 (a very young combination). I didn’t know what I was doing because I was so excited, and he didn’t because his legs were too long and didn’t know what to do with himself either. First lesson went great.

Come the second one….not so great.

Poppy was having Piper when one of the adult riders was teaching a group lesson with me and 3 other people in it. Shaq had been ridden earlier before I came and thought it’d be okay to ride him since he’d be “tired”. I was wrong. Dead wrong. The trot was a little speedy, but the canter was very speedy. He slowly started to build up speed despite my many circles and pulls on his mouth. He ended up at a gallop in our little ring. He did a little half buck causing me to lose a stirrup and make him gallop even faster.

He was reliving his days as a failed racehorse. Poor him.

After numerous trips around the ring and near crashes with other people there trying to stop him and me begging him to stop (didn’t work too well), I finally bailed and landed flat on my back (like you’re supposed to fall…jk). Of course right when I came off, he stopped and stood there like he should’ve been the whole time but you know…stuff happens.

The horse I used to love became my worst nightmare.

Right after, I got on Cyrus and had the good lesson I had planned on having, but I was still terrified. I was able to lesson on other horses to get my confidence back yet again until that day came again. I looked on the board and saw that I was riding Shaq again. I’ve honestly never been so scared in my life at that point. It was obvious that I was scared, and I cried riding him for a good portion of the time. When I got home I’d just cry and cry and cry because I was so scared. I kept lessoning on him and kept crying until the day finally came where I was semi-comfortable on him to show him in a farm show. We ended up doing well, we started a happy journey from there.

Serving the greater Memphis area since 2004.